BABYMETAL was featured on Nikkan Sports Shimbun (Newspaper) in the issue September 21 about their performances at Tokyo Dome with comments about the performance and impressions from Su-Metal and Yuimetal about Tokyo Dome shows and the upcoming UK Tour with Red Hot Chili Peppers, check the release and translation below.

The female metal-dance trio unit BABYMETAL, closed its World Tour at Tokyo Dome on the 20th, after 22 shows in 8 countries including England and the United States.

The band got a total of 110.000 people at the Tokyo Dome in two days (September 19 and September 20). Stage was set on top with huge screens at the center of the Dome, and sources say that their "sky stage" above (the main stage) is as higher than a storeyed building. The members moved energetically during the full stage set, while the crowded audience followed them headbanging during the 12 songs performed, including their debut single "Ijime, Dame, Zettai".

After the show. the vocalist Su-Metal (18 years old) said that "I didn't realize how it was going to happen when the Tokyo Dome shows were scheduled, but the cheers and the smiles from the audience made me so happy."

The band was formed as the "Heavy Music Club" in 2010, as an extracurricular activity for the idol group "Sakura Gakuin", following a mix of idol and metal music. Heavy and deep-bass sounds from a group of professionally skilled backing musicians called "Kami Band", excellent vocals from Su-Metal, and the very cute and dynamic dancing by Yuimetal (17 years old) and Moametal (17 years old).

With growing popularity overseas, an UK tour with the rock band Red Hot Chili Peppers to start in December, with 8 shows in 4 cities was scheduled. Yuimetal says very confident, "Without forgetting the feelings of gratitud of all, we will do our best." 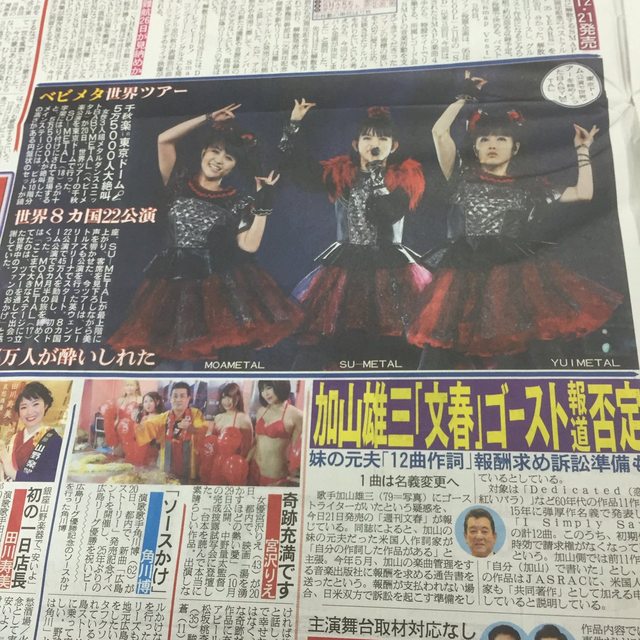