Report: Comparison of followers of BABYMETAL, Sakura Gakuin and Graduates in Social Media

Report about the number of followers of BABYMETAL, Sakura Gakuin and Sakura Gakuin graduates in Social Media considering Facebook, Twitter, Instagram and Ameblo. The following report will show you the reach of each member active in social media to date including interesting graphics.

Report: Comparision of followers of BABYMETAL and Sakura Gakuin members

On graph 1, you can see the total number of followers for all members with some degree of presence in Instagram, Twitter, Facebook or Ameblo. By far, BABYMETAL is the largest with almost 1M, followed by Ayaka Miyoshi with ~450K and Airi Matsui in a distant 3rd place with 230K. This makes Ayaka the single member with the largest follower base, with each BABYMETAL member in 2nd position with ~332K.

All other members fall behind by a large amount, so I have separated them in graph 2 (I call it the 'Idol stage'). Out of these, Ayami Muto is also by far the one with most followers (4th overall), with only Sakura Gakuin itself having a slightly larger number. Members Iida Raura, Hana Taguchi, Hinata Sato and Yunano Honjyo all are in the same range (<10K) while Mariri Sugimoto barely shows.

GRAPHIC 3: Graph 3 is the same as #2, only considering Youtube as well. All proportions remain equal to Graph 2, which is pretty interesting because it indicates that music is really not a main differentiator, while the important thing seems to have regular updates in standard social media (Instagram and Twitter)

GRAPHIC 4: Graph 4 shows the Top 5 contributors but also taking into account Youtube; only counting like this can BABYMETAL individual members get a slightly overhead over Ayaka Miyoshi, each having ~500K followers if we are to divide BABYMETAL's number equally among the 3:

NOTES: Airi Matsui's and Sakura Gakuin's staff Twitter are included, as for all intents and purposes are their own accounts.

Iida Raura's Instagram and Youtube numbers are actually Night of Spica's, which includes of course Yuika Shima too but seems fair enough to assign those numbers to her. 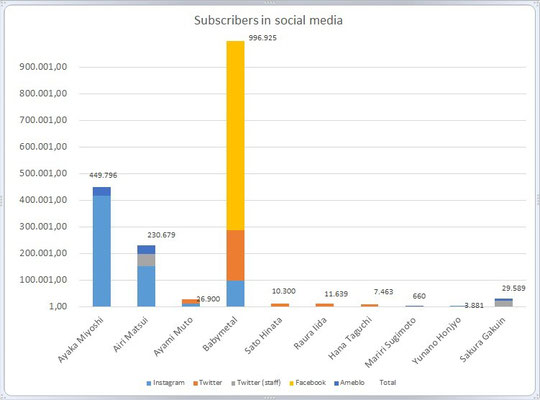 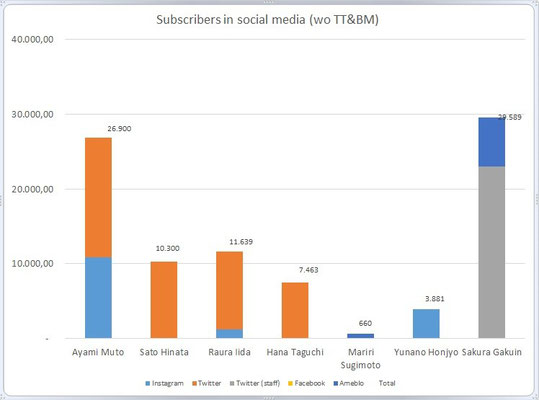 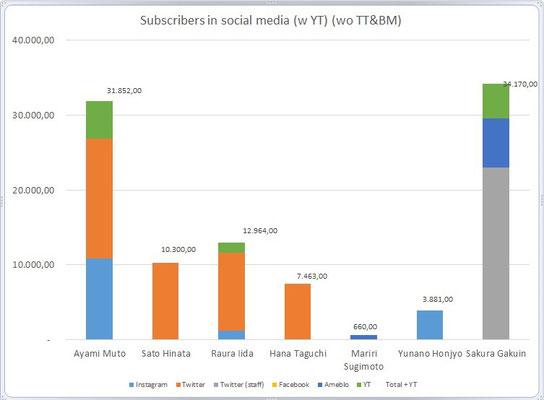 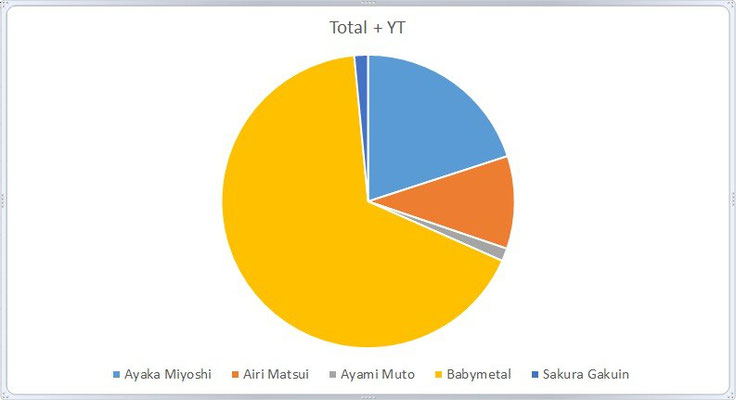