On August 14 in Spain was released a new issue of the Newspaper "El Mundo" including a report about BABYMETAL making mention of Su-Metal, Yuimetal and Moametal, their music, album Kami Band members Takayoshi Ohmura and Mikio Fujioka, Key Kobayashi (Kobametal), Live At Budokan and also Sakura Gakuin. Read the report and check a page of the Newspaper featuring BABYMETAL below.

BABYMETAL highlighted on the 10 most rated albums of the month by "El Mundo".

It's not a child's play. In a virtual search of the BABYMETAL phenomenon came up related groups like "Slayer" and "Rammstein". We talk about the three japanese teenagers dresses as schoolgirls, which their first album is sweeping with a mix of J-Pop -kind of techno bakalao (Bakalao is electronic music from Spain based on agressive rhythm) - with pure and hard death metal. This one represented, also, with an unusual mastery.

Now they are ready to eat up Europe. Yuimetal, Su-Metal and Moametal are the artistic names of the girls whom have revolutionized the heavy genre as never happened in decades. There are too many keys of the Japanese culture without understanding from the stand of Western culture, like  the spectacle protagonized by the three japanese artists which we found really late.

Thanks to Youtube they were known in these parts, but nobody was really worried about their landing in the european stages. The reality surpasses the fiction. Watch the video of one of their greatest hits, "Gimme Chocolate!!" live. Of course, as anything that say "Made In Japan" the secret is inside, in the high technology. A producer embraced in a mistery halo, Key Kobayashi, is who pull the strings hidden under the anonymity of the album credits and costumes of skeletons in the band performances. Unknown musicians for the audience but with an exceptional talent. The guitarists are Takayoshi Ohmura and Mikio Fujioka, who are apparently permanent members of this team that according to photos looks very numerous. The girls are, however, who show their faces. Since they don't look like the composers of the brutal metallic load where are hanging their delicate and "innocent" voices, there is people who see a clear crime of labor exploitation. Not seems to be the case of Suzuka Nakamoto - real name of Su-Metal - and her friends whom started their career as sub-unit of other sub-group of girls. Sakura Gakuin, mother band of the phenomenon. At the end, they ended surpassing it in sales, besides of failing the main rule; having less than 15 years old.

BABYMETAL only counts with their homonym debut album and breaking all the records of age, on Live At Budokan. Musically, we are in front of an exhibition of death metal with a little bit of childishness besides of adding J-Pop elements, emphasising the ambiguity of these teenagers that can't stop jumping over the stage, with spiked wristbands and horns up. 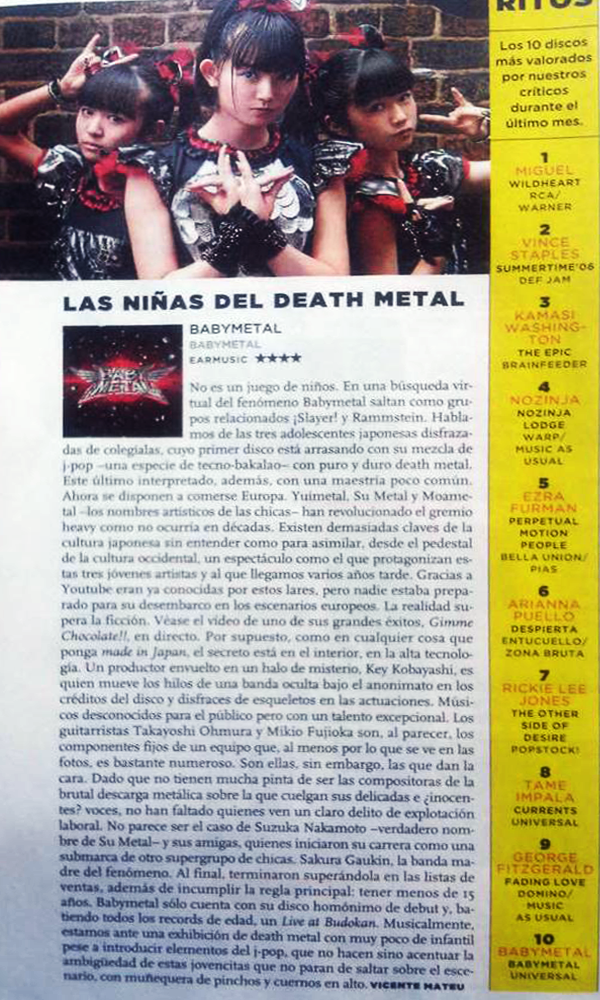