Suzuka Nakamoto was interviewed in the Vol.1 of "Dia Daisy" Magazine released on October 31 of 2009. This is pre-Sakura Gakuin and BABYMETAL! In this short introduction and interview Suzuka talks about resemblances, worries, modeling and more! Read this little interview translated below!

Suzuka about resemblances and modeling on Dia Daisy Vol.01

Which famous person or animal would you say you resemble?

Suzuka: "It is often said that I resemble a monkey (Laughs)."

What do you worry about the most now?

Suzuka: "The "seed of joy" I got as a present is growing, but I worry greatly about what kind of flower it will blossom into."

Suzuka: "I participated in an audition and received second place."

And that she collects straps of Stitch from Lilo & Stitch.

2) "Christmas" by JUDY AND MARY

3) It was hard to strike a pose because it was the first time as a model. I'd like to be better. 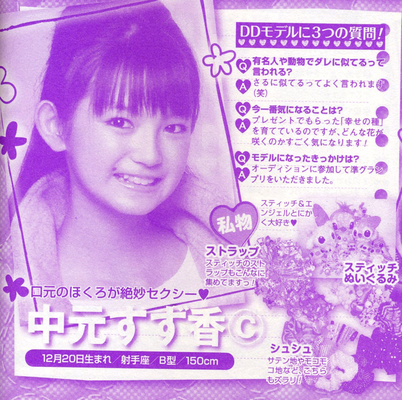